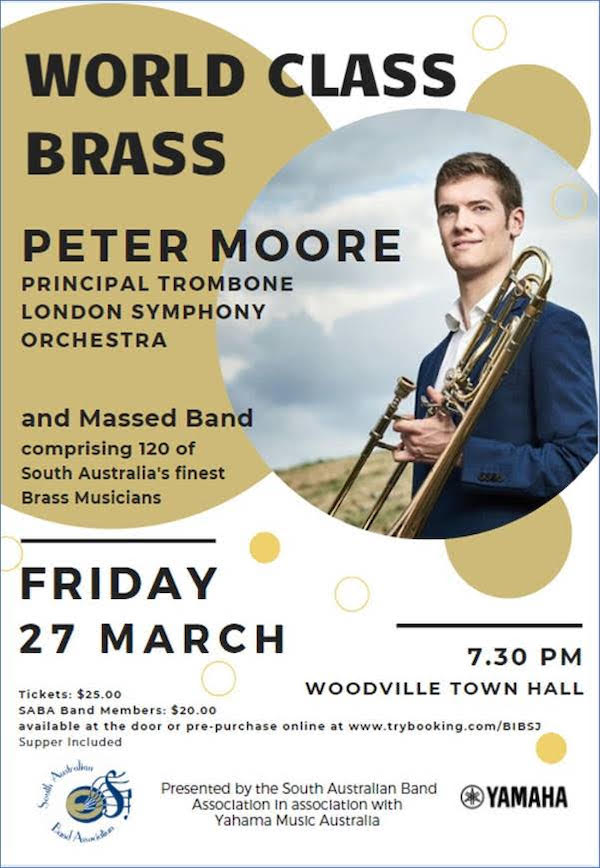 The South Australian Band Association has regrettably postponed this concert due to the new Coronavirus restrictions on events. They are hopeful that they will be able to reschedule the visit by Peter Moore and the concert at a later time.

The South Australian Band Association is pleased to present a Concert with world- leading trombone virtuoso from the UK, Peter Moore.

Mitcham City Brass will be part of a specially assembled Massed Band featuring over 120 of SA’s leading brass band musicians. The band will play some exciting arrangements which will be followed by Peter’s dazzling performances from his trombone repertoire. This will be an event not to be missed.

Peter came to national attention in 2008 at the age of twelve when he became the youngest ever winner of the BBC Young Musician. He is the Principal Trombone of the London Symphony Orchestra and, having been a member of the LSO since 2014, will take a sabbatical in 2019/20 to focus on new projects. Alongside his performing career he is Professor of Trombone and Artist in Residence at the Guildhall school of Music and Drama. Peter is well known to us in SA having visited in 2014 performing with SA’s Brass FX and James Morrison on their CD.