Mitcham City Brass has won the Open C Grade Brass section at the 2017 State Championships. In a tie for first place, our strong performance in the test piece got us across the line in a count back. Musical Director Stephen Packer had predicted during rehearsals that the challenging test piece, Northern Landscapes by Peter Graham would be the key to success. The extra work we put into the piece in the lead up to the Championships clearly paid dividends. The band also performed our friend Mark Smith’s arrangement of ‘How Great Thou Art’ and the William Rimmer march ‘Cross of Honour’.

Mitcham also had a huge presence in the Solo and Small Ensembles event on the Saturday with 11 of our band members performing 26 solos between them and numerous small ensembles also taking part.

In a final nod to the outstanding contribution the band has made to banding in SA during 2017, The South Australian Band Association awarded us ‘Band of the Year’.

Congratulations to all those who participated. 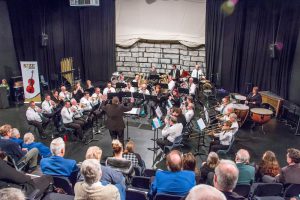