The present band was formed in 1901 by Mr. Carl Stanley, Geo Lawson and J. Tyler and has continued to function ever since.

Practice at this time was held in St. Michaels Hall and the Band was, known as the Mitcham Brass Band, later this name was to be changed to Mitcham City Brass Band after Mitcham became a City.

To get the Band started, Mr. Lloyd Price loaned the Band forty pounds ($6,500)* which was to be repaid at Ten Pound ($1600) per year. This loan, together with donations collections, fees, etc. allowed the purchase of instruments and Hall Hire etc.

The following list is some of the Band expenses for the first year:-

In 1902/3 several young members used to go to the workshop of Mr. C.A. Stanley in Rose Lane, Mitcham, and practice with the aid of candles for light, this they did as many as three nights a week besides the regular Practice Night. The Auditors of the Band at this stage were C.W. Stanley, W.C. Vowels and E. Blythman.

In 1903 Mr. C. Allison took over the position of Bandmaster of the Band and held this position until 1911. (He was also conductor of Adelaide Vice Regal at the same time.) The Band made good progress under his tuition and in 1911 had grown to a strength of 26 players.

In 1906 the Band used to congregate in Mr. Gcdden’s Cow shed in Hawthorn and practice by candlelight and hurricane lamps.

In 1908, at its own expense, the Band enlarged the Rotunda on the Mitcham Reserve from which many open air concerts were staged by the Band for the benefit of the community over the coming years. During the year, as an inducement to younger players, the Weekly Subscription was reduced from 1/-  to sixpence.

By 1909 the Band possesed 23 instruments valued at about 125 Pound ($20,000) besides those privately owned by various members and played several times throughout the year at various Vice-Presidents homes. This helped to create a let of good feeling between the Subscribers and the Band Members. The Band was also giving fortnightly concerts on the Mitcham Reserve during the Summer as well as various other locations.

* Pound/Shilling/Pence conversion based on 2021 relative values 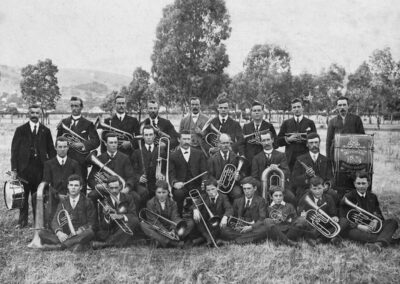 MBB at Mitcham Reserve circa 1905 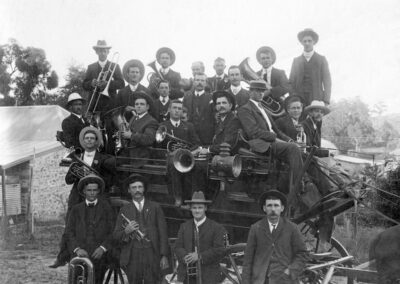 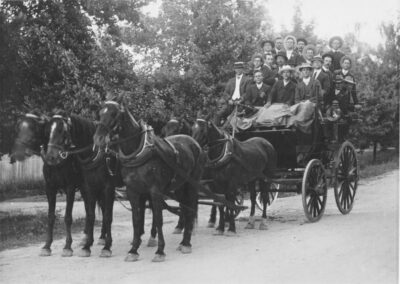 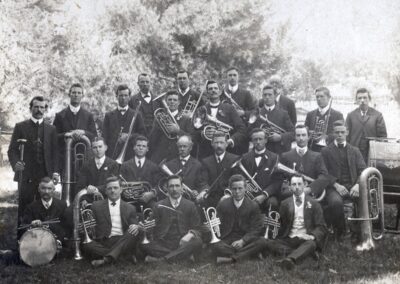