During World War 2, the Band again worked very hard for the War Effort in spite of the loss of a number of members who had joined the Armed Forces. But enough of the “Old Brigade” remained to keep the Ship afloat with the assistance of some of the Junior Members and various outside Bandsmen. Also the Band purchased War Saving certificates with money received from engagements. It also helped the newly formed Mitcham Citizens Committee to raise funds for the War Effort, and at Christmas Time sent hampers to members overseas.

In June 1942 the Defence Forces took over the Band Room to store food for the Military Forces, which meant the Band had what room was left, but, on occasions, the Corporal in charge would treat the Band to Hot Coffee on practice nights, which was very welcome.

During these years the Band kept making regular appearances on the A.B.C. Concerts in City Council Parks, Unley, Blackwood and Mitcham Gala Days and many others.

During 1942, if the Mitcham District Council had not assisted the Band with finance to have their uniforms repaired and brightened up, and some uniforms altered to fit the younger members, it would have been in a very unhealthy position, as, at the time, there were not any paid engagements for Bands because if the Band received any donation at any patriotic demonstration, it was handed back to the organisation concerned. Also during this period Mr. M. Hood started another Learners Class which made excellent progress.

In 1944, with the raising of the status of the Mitcham District to a Corporation, the name of the Band was changed to the Mitcham Municipal Band. This year the Band completed its 21st appearance for the Australian Broadcasting Commission and the Learners Glass had by this time increased to 19 members thus ensuring a bright future for the Mitcham Band.

During this period the then Secretary Mr. E. Brook approached the then Mayor of Mitcham Mr. W.A. Norman concerning a Band Hall of their own and he stated that in the near future a Town Hall would be built in Mitcham and he suggested that the Band make a note of such a room and when the time comes, write to the Corporation stating what was required and that they were prepared to work for it. This was done but to no avail, because, nearly 40 years later, the Band was still practicing in the Institute (Youth Centre).

In 1945 Mr. L.O. Chenoweth decided that after 34 years service to retire from the position of Bandmaster, his place was taken by- Mr. George Bowes who had been a member of the Band for 20 years and was a veteran of two World Wars and had been in charge of the learners Class for the past twelve months.

With the War over and all the servicemen returning, the Band looked forward to brighter days. At this period of time and after 44 years of continuous operation, the Band’s finance stood at 4 Pound 16/4 ($9-63). The membership increased slightly during the year, ending up with 27 players on the register. The Band played at 17 engagements during this period.

1946 saw the return of some of the Band’s members from active service and membership jumped from 27 to 34 members. After carrying out an inspection of the instruments that had given the Band many years of faithful service, it was decided that the time had arrived that they would have to look around for some new ones, but as these instruments were at a prohibitive price, and hard to get, the Band was compelled to have their old ones repaired and hope that they would still give a few more years service. Consequently the finances suffered and a loss was shown for the year.

Up until this time all the cups and trophies won by the Band had been in the care of the Bandmaster, but on the recommendation of Mr. L.O. Chenoweth (ex Bandmaster) they handed the cups and trophies over to the Mitcham Corporation for safe keeping and to be displayed in the Council Chambers. On accepting charge of the trophies on behalf of the Council, the Mayor, Mr. W.A. Norman assured all members that the Council would take good care of them, and, when the time came for the Band to be able to display them in their own room, they would be handed back. By this time he hoped that they would be double in number. Councillor C.R. Sutton supported these remarks, after which the members of the Band were entertained at supper by members of the Council. This year saw the learners Class that was started in 1942 come to an end. Also this was the year that Mr. Eric Smith from Mitcham Band was appointed the position of Chairman of the S.A. Band Association, and Sgt. R.B. Alley, the Band Euphonium player was promoted to the position of Bandmaster of the South Australian Regular Army Band.

Due to the Band having a new Bandmaster, it took the older members quite some time to get Mr. Chenoweth’s ideas cut of their minds and to get used to Mr. Bowes’ new methods, therefore, it was quite a period of time before the Band had completely settled down, but, by the end of the year, was back at its musical best.

1946 was another poor year as far as the financial side of the Band was concerned, due to the lack of engagements, (only 11 due to illness of the Bandmaster) and also a high repair bill which was necessary because of the years of service of their instruments, but they hoped to re-coup their losses in the New Year. After many years of absence from the contest field, it was decided to compete at Tanunda Contest on October 25th, and they performed with credit in gaining third place. To assist the Band in this quest, the Mitcham Corporation allowed the Band use of the Red Cross Rooms (free of charge) for extra rehearsals.

1946 saw a slight improvement as far as the financial status of the Band was concerned and the Band ended the year with a small profit in spite of some mere heavy expenses incurred by having to repair more instruments.

After Tanunda the previous year, the attitude and enthusiasm of the members became lax, and the Bandmaster and his Committee became worried. The outcome was that 4 members resigned, 3 members were not seen very often and so the Band decided not to go to Tanunda, thus undoing any good that was done the previous year. However several members entered the Solo and Party Competitions gaining 2 firsts, 3 seconds and 1 third place.

1948 was also the year that Messrs A.R. Michell, W.J. Hood, C.U. Hood and G. Michell completed 21 years continuous service and thus were made Life Members of the Mitcham City Band. The Band also carried out 14 engagements during the year but only 3 were profitable. They were:- Osmond Park, Anzac March and John Martins Pageant.

1949 was a very worrying time for the Committee to know how to keep the instruments in good repair, as new instruments were at a prohibitive price considering the Band’s financial status, although there was a slight improvement on last years balance, also new uniforms were needed badly.

In response to numerous requests, the Band revived an old custom of playing Christmas Carols in the City of Mitcham on Christmas Eve and. Christmas Morning, but, unfortunately, the night was spoilt by heavy rain. In spite of this, the Band was well received and performed very well. But alas, due to some of the members being wet through at about 4-00a.m., it was impossible to continue the programme. The membership at this stage stood at 32 with an average attendance of 22. It had been proposed that the Band compete at Ballarat this year, however, this did not eventuate, but instead decided to enter the 1950 All Australian Band Contest (N.B.C.) to be held in Adelaide. 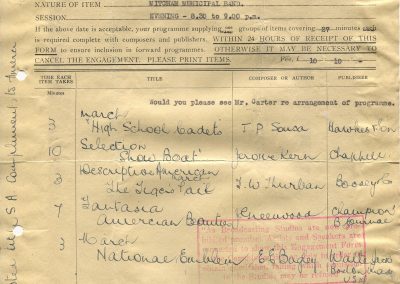