In 1930 Life Membership of the Mitcham City Band was bestowed on W.A. Walter and W.G. Hilditch, this was gained for 21 years continuous service.

During this period and right through the Depression years collections were taken during some engagements and divided among the unemployed members of the Band (5 members) as there was no Social Security at this stage.

For many years between the two World Wars the Band played every year at the Childrens Hospital fetes without payment.

Also in 1931 the Band took part in the Madame Melba’s Memorial Service, and assisted the R.S.L. in their Anzac Day Service and celebration, an engagement that they had been doing since the end of the war and have been doing at the same time of year ever since, and to show their appreciation, the R.S.L. donated a Bass Drum to the Mitcham Junior Band in 1980.

In 1932 the Band once again entered the contest field at both Tanunda and the Norwood Carnival without any success, coming last in “B” Grade at Tanunda and 2nd at Norwood and it was decided that the Band apply to the South Australian Band Association to be reclassified to “C” Grade. Due to financial difficulties and the Bank Balance being 2 Pound ($4-00) and losing a number of permanent playing engagements, the Ladies Committee, which had ceased to exist, was again put into operation under the leadership of Mrs. Geo Curtis to help raise funds.

At the end of 1933 and beginning of 1934 several of the Band members resigned to try to seek employment in other parts of South Australia and Australia. So the Band placed an advertisement in the paper for players, something they have done on numerous occasions since but alas without success.

But alas there is no record of the Band ever winning anything.

1935 was Mr. L.O. Chenoweth’s Silver Jubilee Year as Conductor of the Mitcham City Band (25 Years), the Band started the year with 27 members, of this number 3 resigned during the year, but it is pleasing to record that 9 new members joined, thus making a total of 33 members at the end of the year.

During the year Mr. C.K. Horsell started up another learners Class with 15 boys.

During 1935 the Band performed at 26 engagements:- Asylum 11 times, Mitcham Reserve 5 times, Elder Park twice, Anzac Service at Mitcham, Kalyra, Childrens Hospital, Adelaide Hospital, Anzac Procession, Maughan Church, Adelaide Oval Band Concert. On Good Friday the Band invited the Hindmarsh Band to a picnic/cricket match at Blackwood Oval and it is pleasing to note that besides playing music, the Band could also play cricket, as they were victorious and won the “Ashes”. This year it was decided to present a Gold Medal to the Most Improved Player. It was also during this year that the Committee of the Band decided to hold its meetings on another night other than Band Practice Night (which had always been the case since the formation of the Band) so that more business could be attended to.

In 1935 Mr. W.A. Walter became the first member of the Mitcham City Band to receive the honour of life Membership of the S.A. Band Association.

In 1936 Mr. G.F. Lawson retired after 19 years as Chairman and was replaced by Mr. W.A. Walter. During the year the Band performed at 22 engagements:- Parkside Mental Hospital 12 times, Anzac Service at Mitcham, Anzac March in Adelaide, Wayville Oval on Christmas Night, Adelaide Oval, Adelaide Hospital, Home for Incurables and 2 concerts on the Mitcham Reserve.

To arouse the interest of the people of Mitcham, 2 citizen concerts were organised, one in July playing to a full house, but the collection was just fair, and the other good concert in October again with a full house and a much better collection.

In 1937 it was proposed that the Mitcham R.S.l. Anzac March commence from the Mitcham Institute (now Youth Centre) to the Reserve, where, as for the previous 20 years, it had been from the Soldiers Club Rooms (old Council Chambers) to the Mitcham Reserve, which was a very long march, (this has been done ever since.)

In 1937 the Band made a number of appearances on 5CL for the A.B.C. and various massed Band performances and various local contests, a total of 30 engagements. This was the first year that the Band took part in John Martins Christmas Pageant, but alas, they also lost one of their regular engagements, that of Parkside Mental Hospital after 23 years.

After the success of the previous year’s citizen concerts, another was staged to a full house in March, but alas the collection was very poor so the idea was dropped. Also an appeal for Honorary Members (non-playing) at 1/- ($0-10) was launched with a heart breaking result, only 8 enrolled, so this idea was also dropped for the moment and was not reintroduced for many years.

During 1938 Mitcham Band performed at a number of engagements to raise money in aid of the Bush Fire Fund besides again playing on 5CL and many other engagements (15 in all). But after all expenses were paid, (Bush Fire Fund and other expenses) the Band had only 10/- (SI-00) left over. During the year membership started to fall off slightly and at the end of the year they had only 27 players after commencing the year with 33 players.

It was very regrettable to see that up until this stage Mitcham was the only Band in the State not receiving a Civil Grant each year, (something that has changed since.) Mr. W.G. Hood received the award for the Most Improved Player for 1938. 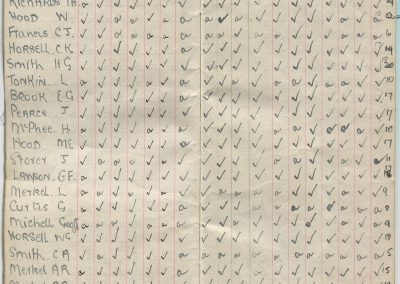 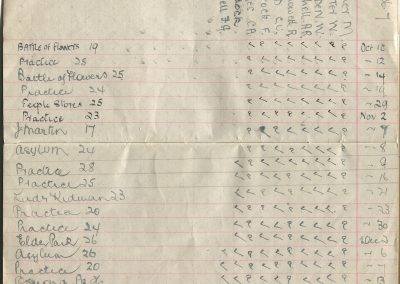 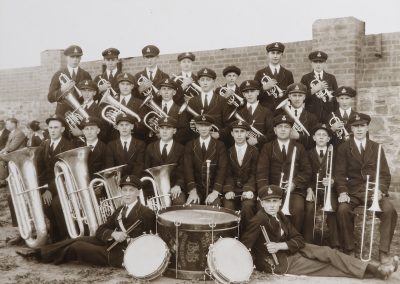