In 1920 the Band played on a balcony in Hindley Street during the visit of the Prince of Wales (later King Edward 8th) as he was driven around the City of Adelaide with a Police escort. As the Prince rode by, the Band struck up “God Bless The Prince Of Wales” at which he looked up, saluted and gave a big smile.

Besides playing for the Prince of Wales visit, the Band took part in 19 other public performances during the year including visits to Charitable Institutions, Church Fetes, the unveiling of the Public School Memorial and concerts on the Mitcham Reserve, Kingswood Oval and Adelaide Rotunda.

To infuse members with some enthusiasm at this point of time, the then Secretary, Mr. A.B. Michell and Bandmaster, Mr. L.O. Chenoweth decided to donate gold medals for Best Attendance and Most Improved Player. (These awards were given for many years) The first recipients of these awards were Mr. G.F. Lawson (Best Attendance) and Mr. G. Hilditch (Most Improved Player)

In 1921 the Band contested at Tanunda in “C” Grade winning the Quickstep and various other sections. After the Tanunda success, Mr. A.B. Michell moved a motion that the Band compete at the Ballarat Competitions so, a Ladies Committee, under the leadership of Mrs. W. Godden was formed and they did a marvellous job in helping the Band to raise the necessary money to enable the Band to attend Ballarat in 1922 free of debt. However, the Band did not meet with much success at these competitions but tied for third place with the I.X.L. Band from Hobart. During this trip they stayed at the Military Arms Hotel off Bridge Street where the main Car Park now stands. A very amusing incident is told of this trip, although it could have been very dangerous. It so happened that a number of Bandsmen were sitting on the balcony of the Hotel with a former member of the Band who happened to have a slingshot with him when a man was passing with a horse and Masher Dray, the ex-member let go with a large shot which hit the horse on the rump where by the horse took off at great speed, upsetting the poor old man into the back of the Dray, luckily no harm came of it but the man was probably bewildered until his dying day as to what happened to his horse.

In 1922 a “Boot Club” was formed to which sixpence ($0-05) was contributed each week by every member and, when there was enough money, boots were purchased wholesale so that all were alike. (Boots were worn in those days) At a later stage a shirt fund was formed and the same action took place so that everyone dressed alike.

During the year the members attended 138 performances which included all practices and engagements some of which were playing at Bedford Park, The Stockade, Hospitals and other local affairs. As this was the Band’s 21st year of continuous operation, seven of the original members were now due for “LIFE MEMBERSHIP”, these “being the first Life Members of the Band, but, it is pleasing to record that there have been many others over the years.

Also during 1922 the clutching hand of the Federal Income Tax Department threatened the Band to such a degree that they felt it was not worth continuing when Mr. A.B. Michell (Honorary Secretary) took a very firm stand and, with the help of the “Mail Newspaper” exposed … the matter publicly, and the result was an order from the Federal Treasurer exempting all Bands from having to pay Income Tax.

From 1922 to 1927 the Band had a weekly Wednesday Night engagement playing at the trots at Thebarton until betting was made legal, and patrons would rather gamble than listen to Band Music or any other kind of music. Interspersed with this they also had another engagement with the Motor Cycle Racing at the Showgrounds once a fortnight on Saturday Nights.

In 1923 the Band once again competed at Tanunda in “C” Grade, again gaining several first places, and earned the distinction of being the best disciplined Band at the competitions. Also during the year the Band was fitted out with new uniforms.

In 1924 the Band once again made the trip to the “Mecca” of Bandsmen, namely Ballarat, without success as far as prizes were’ concerned, but two of the members met a couple of young ladies, who later became their wives, these members being Mr. W.G. Horsell and Mr. H. Kennedy.

Also in 1924 through the efforts of Mr. A.B. Michell, the whole of the Band and the Band’s property was made the property of the local council. At the time that the Town of Mitcham was proclaimed a Municipality, the Band, with the concurrence of the Council, was called the Mitcham District Band, and, later, upon Mitcham becoming a City, the Band followed suit and became the Mitcham City Band.

In this year the Band borrowed 200 pound ($400-00) from the Mitcham Council (which was repaid within 2 years) and purchased the following new instruments:- 3 Basses, 1 Euphonium and 1 Trombone. During the year the Band performed at 84 engagements (32 of which were trotting engagements) besides weekly rehearsals.

In 1925 the first Mitcham Junior Band was formed under the direction of Mr. Bert James and continued until 1932 when it was disbanded as the Senior Band was desperately in need of players.

The Band once again competed at Tanunda in “C” Grade in 1925 and carried off all the honours, Street March, Selections, and Quick Step as well as two other trophies, a unique experience at the time, and were recognised as one of the foremost Bands in the State, and certainly the most consistent.

In 1926 the Band was still in “C” Grade and once again competed at Tanunda, repeating 1925’s record. A week later they competed in the Adelaide Competitions and again won everything, this compelled promotion to “B” Grade, which was the highest Grade at the time. At this period of time the Band dispensed with weekly subscriptions and entrance fees (which were later reintroduced) and reimbursed members their fares and the Bandmaster’s fee was raised to 1 pound ($2-001 per week).

During the year Mr. Bert James who was then Deputy Bandmaster of the Senior Band and leader of the Junior Band was made a Life Member of the Mitcham City Band. He also made the Suggestion that in future the Deputy Bandmaster should conduct the full Band at practice from time to time as he found it very difficult on the occasions that the Bandmaster could not attend engagements to take sole charge of the Band. This was accepted and was done for a few years. During 1926 the Band gave only 120 performances including all rehearsals, 16 less than previous years much to the Bandmaster’s disappointment.

In 1927 the Band engaged Mr. 0. Summerton to be coach and Mr. Laurie Chenoweth (Bandmaster) played Solo Cornet so that they could compete at Tanunda in “B” Grade, again winning everything and beating the renowned W.S. May with his Glenelg Municipal Band, which was very gratifying to everyone. After this, the Band began to decline, as some of the older members felt that they had had enough and so pulled out, which meant that the Band did not compete again until 1932 and 1936 when, with practically a new team of officers and Bandsmen, they could only fill minor places, mainly because the Bandmaster could not get the response that he sought.

Never the less in 1929 Mitcham Band performed at a number of engagements. Among these were fetes at St. Peters College, and the Goodwood Orphanage, All Australian Exhibition and their first engagement on radio, this was a half hour programme on the A.B.C.

Also during the year the Band had much pleasure in filling in for Holden’s Band at the Royal Show and also performed at the dedication and unveiling ceremony of the Mitcham Soldiers Memorial Rotunda by the then Governor of South Australia, Brig. General the Honourable Sir Alexander Hore-Ruthven V.C., K.C.M.G., C.B., D.S.O. This gave the members of the Band a greater incentive than before to work to the advantage of the district and the Band by being able to utilise the Band Rotunda to greater effect than was able under the previous conditions prevailing at the Reserve.

Later this year Mr. A.B. Michell retired as Secretary after having completed 26 years in office, His place was taken by Mr. W.G. Hilditch. 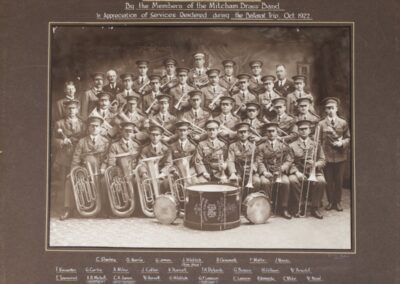 A B Michell Presentation with frame 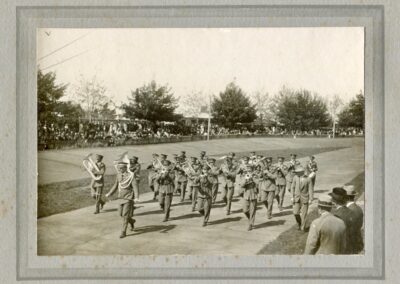 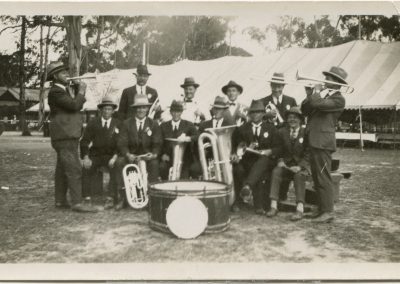 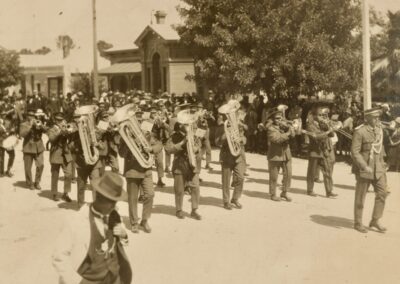 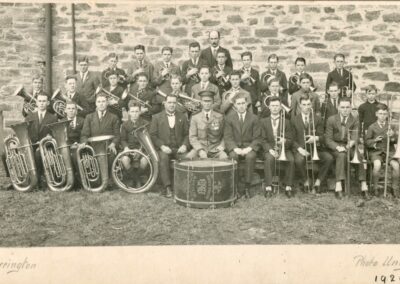