1980 was Mr. W.G. Horsell’s year as it was the year that he was honoured by being awarded Life Membership of the South Aust. Band Association which, due to a slight misunderstanding, had to be presented to him by Mr. V/.J. Hood (an ex Bandmaster) at a Wednesday Night practice in July, also the Band gave him a surprise party in October to celebrate the completion of 65 years continuous service as a player with the Mitcham City Band, having joined the Band on Oct. 6th 1915, to this night invitations were sent to his family, the Mayor and Mayoress of Mitcham (Mr. and Mrs. K.W. Pearson) Mr. R.R. Millhouse M.P. for Mitcham and his wife, and many of his friends and ex Band members. This event was televised by A.D.S. Channel 7 and shown on State Affair.

Due to the fact that the Band’s Euphonium players had applied for 12 months leave of absence because of studies, the Band could not take part in as many engagements as were done the previous year, but they still performed with a great deal of credit in the engagements that they did participate in, such as:- Dunkirk Veterans March, Girls Brigade March, Salvation Army 100 years S.A. Centenary Celebrations march through Adelaide, Blackwood and Brighton Rotary Fairs, S.A. Camera Club, Glenelg, Blackwood and John Martins Pageants etc.

Because of the National Band Championships held at Mt. Gambier at Easter 1980 which also included a Junior Band Contest, the State Junior Band Championships format was changed from a graded contest to an open grade youth festival of music held at Hahndorf on July 5th, to this contest Mitcham decided to send a greatly reorganised band from the previous year, due to members turning 18 (thus becoming Seniors) and a number of resignations, but, nevertheless, they performed with great distinction and won the music and stage presentation trophy, beating the last years “A” Grade champions Klemzig No. 1.

During the year a number of the younger members formed a social club committee to look after the social and entertainment side of the Band, some of the functions were the surprise party evening for Mr. W.G. Horsell, Ten Pin Bowling, A Tour Through the Advertiser, Christmas Barbeque and organised a competition to find a design for a Band Tee-Shirt.

1981 was a year of both pleasure and great disappointment, it was very pleasing to see the Junior Band once again win the Junior Band Contest at Hahndorf and Peter McIntyre win the Drum Majors Trophy. As for the Senior Band, early in the year saw a reasonable attendance at rehearsals and engagements, resulting in some quite good performances, however, as the year progressed, resignations and declining attendances had a marked effect on musical performances, but, nevertheless, the Band was still able to accept 18 paid engagements as well as some charity performances such as Senior Citizens Homes, Minda Home and Bedford Industries.

* At the Annual General Meeting of the South Australian Band Association two more members received Life Membership of the S.A.B.A. (for completion of 50 years service to Banding), these members were Mr. W.J. Hood and his cousin Mr. C.U. Hood in June of this year the Mitcham R.S.L. presented the Junior Band with a new Bass Drum at an open air concert given by the Band.

On a disappointing note, during October, the Bandmaster Mr. H.C. Rault handed his resignation to the Committee to come into effect from the last engagement in December, and after discussions with Mr. Rault and the Committee Mr. Ray Sadler was asked to take charge of the Senior Band and Mr. W.J. Hood was asked to take charge of the Junior Band until a replacement Bandmaster could be elected at the A.G.M. in April. However this did not meet with the approval of some members of the Senior Band and a Special General Meeting was called for January 20th 1982 and chaired by the Mayor of Mitcham Mr. K.W. Pearson, the outcome of which was that the Committee had worked within the constitution and their actions were upheld. It was decided at this meeting that the position of Bandmaster; be advertised in the paper and that all applicants be given the opportunity to conduct the Band prior to the A.G.M. so that the Band could then make their own choice.

After the advertisement was lodged the Band received 4 applications for the position of Bandmaster and 1 application from a possible player, of these 4 applications Mr. E.K. Collins was selected at the A.G.M.

During the first 3 months of 1982, under the leadership of Mr. Ray Sadler, the Band made a remarkable and rapid recovery and achieved a dramatic difference to its sound generally and playing numbers that they thought previously impossible.

1982 saw a vast musical improvement in the band, this was entirely due to the efforts of the new musical director Mr E. Collins, who introduced the band to a new type of music that interested both the young & old members & cemented the band together as a team of musical friends.

Also due to the efforts of Mr D. Curnow. the band purchased a new set of uniforms, consisting of blue trousers, blue coat with darker blue collar, & waist coat (purchased from Brian Ferrari, for $40-00 each), light blue shirt & tie for day wear, & dark blue bow tie for evening engagements. This uniform made its first public appearance in October at a special concert held in the Mitcham United Church Hall for an audience of invited guests. The concert was called the “New look New Sound Concert” because it also introduced the bands new sound to the public, also during the concert Mr. V. Carpenter, received his life membership of the Mitcham City Band having completed 21 years continuous service.

1982 also saw the culmination of something that the Mitcham City Band had been working & hoping for since it first started, that being their own home and thanks to the efforts of the Mayor Mr. K. Pearson & Town Clerk Mr. Wirth. the band was able to obtain a permanent home in the former Mitcham Junior Primary School Principal’s Office on Belair Road.

As the band had decided to concentrate its efforts on developing a concert program & not enter any competitions during the year several members assisted The City Of Adelaide Brass Band compete at Tanunda & Mount Gambier thus gaining further experience & cementing friendly relations between bands.

During the year a new dimension in sound was added to the band with the purchase of a Glockenspiel (or Bell Tyra when held in a upright position & used for marching) for the percussion group.

The bands membership improved slightly during the year & by the end of the year the average attendance at practice was 24. As had been the case for a number of years the band once again had a very full year with engagements.

One disappointing aspect of the year was the Junior Bands inability to compete at the Junior Championships at Hahndorf this was the first time it had missed in 10 years.

The bands social club continued to operate with its usual efficiency organizing such functions as Ten Pin Bowling Nights, Picture Night, B. B. Q. etc.

* At the 1982 South Australian Band Association A.G.M. our newly appointed Musical Director, Mr. E.K. Collins, was honoured by becoming a Life Member, having completed 56 years continuous service to banding, but as he was unable to be present, the honour was bestowed on him at the A.G.M. of his previous band, i.e. Kensington and Norwood.

1987 saw the retirement of Mr. E.K. Collins. He left the band in a good healthy condition. During this year Ray Curson was appointed as Musical Director with Arthur Cooper as Chairman, Andrew Deer as Secretary, Bill Pegram as treasurer and The Hon Robin Millhouse as President. Ray Curson continued with the band as Musical Director for two years. During this time the band competed in D Grade without much success at the State Band Championships at Tanunda and the National Band Championships which were held in Adelaide. The senior band hand not competed in any contests for quite some time so this was a significant milestone. In 1988 Mrs. M. E. (Betty) Deer took over the rains as Secretary. A position which she held in excess for ten years

1989 saw some changes to the band. This was Arthur Cooper’s last year as Chairman. Ray Curson resigned as Musical Director and was replaced by John Hooper. A position which he held for only a short time. The standard of the band at this time was an average D Grade band. The hunt was now on again for a new Musical Director. Later in this year Reg Chapman came to the band to help out for a while. He worked with the band which went to the State Band Championships at Tanunda with only a short rehearsal time. The band played well and won the contest outright in D Grade. A feat which had not been known within the band for many years. The band continued under the direction of Reg Chapman until 1993. During this time the band successfully competed at the State Band Championships at Tanunda, National Band Championships in both Melbourne and Sydney, and several journeys to the Royal South Street Contest in Ballarat. The band progressed quickly through the grades with a number of wins and at the time Reg Chapman left the band it had regained its place within B Grade and was going very strongly. 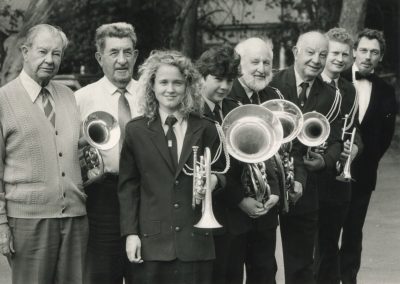 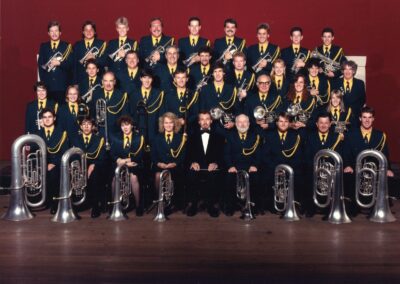 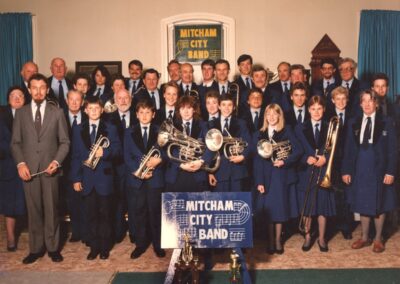