1950 saw the Band being fitted out with new uniforms, the first since 1931, and it was very gratifying to have had a strong Ladies Committee working in conjunction with the members who. raised 330 Pound ($660-00) and supported generously by the Mitcham City Council so that they were all paid for. During the year the Band purchased a Bass Trombone for 10 Pound ($20-00) and repairs to instruments totalled 15 Pound ($30-00) but the Band still managed to make a small profit.

One disappointing aspect however, was the inability of the Band to compete in the Australian Band Championships (which were held in Adelaide) due to sickness and resignations. However the Social Committee (this committee had been very active for a number of years) organised a day trip to Mannum which turned out to be one of the most successful trips ever held up until this period.

The Band had a very busy year doing 25 engagements made up as follows^- 7 social events, most of these were for the Band Pete effort, John Martins Pageant, R.S.L. Remembrance Service in November, Anzac Service in Mitcham, Mitcham Gala Days, 6 concerts in the Reserve and 1 at Blackwood etc.

1951 was a very special year for the Band as it was the Band’s Golden Jubilee (50 years continuous service) and also coincided with the Jubilee of the Commonwealth, and to celebrate the occasion, a social was held on a Wednesday night in November to which all past and present members were invited. During the year Mr. Bowes started up another Learners Class, having a membership of about 12 boys.

Besides planning for the Jubilee celebrations, the Band performed at other functions the same as they had done for the past 50 years.

Some of the functions performed at this year were:- Mitcham R.S.L. Anzac Service, Womens Service Association, District Bush Nursing Association, St. Michael’s Fete, John Martins Pageant and Brighton Oval in aid of a Polio Case of a Bandsman etc. 2 of these engagements, namely Mitcham R.S.L. and John Martins Pageant, the Band had been doing for years.

In 1952 the Band started the year with a membership of 32 but only had 27 by the end of the year, but it is pleasing to note that the learners Class now had 18 boys in training, so the future of the Band looked very bright. Also it had been many years since the financial position had been so healthy with 56 Pound 6/3 ($112-62). This was chiefly through the hardworking efforts of the members.

This year the members formed an instrument fund and planned to raise 1000 Pound ($2000-00) to replace the instruments which, due to many years of constant use, were wearing out. Also it was the year that Mr. A.B. Michell completed 50 years continuous service (he joined the Band in 1902.

By 1953 the Band was starting to reap the benefits of the Learners Class that had started 3 years previously, when 5 of the learners were promoted to the Senior Band to fill gaps caused by resignations and sickness, however, the Band continued to perform at a number of engagements, 20 in all, including John Martins Pageant, Mitcham R.S.l. and a Coronation Concert etc.

In 1954 the membership had again grown to 31 with the Learners Class still going strong but was not progressing as well as was hoped due to the learners being at High School and Homework as well as other school activities were taking their toll on required practice times. * A fete was held during the year which brought 150 Pound ($300-00) towards the new instrument fund, thus giving a total of approximately 350 Pound ($700-00). At this period the Band was musically at a very low ebb so the suggestion was made to go to Tanunda the next year to see if it would help to raise the standard, but some of the members stated that they would rather have a good concert Band than a contesting one.

** The Band performed at the following engagements:- John Martins Pageant, Queen’s Progress (for which there were three rehearsals), Mitcham Reserve, Reserve on Victoria Terrace, Anzac and Rememberance services for the Mitcham R.S.L., Belair Carols on Christmas Eve and Ashford Hospital Fete etc.

In 1955 the Band membership stood at 32 registered members, 1 more than the previous year, but, due to various causes i.e. illness leave of absence etc., it had only 23 active, playing members, but the Band still took part in 20 engagements as follows^- Colonel light Methodist Fete, Blackwood Hospital, Plympton School Fireworks, C.T.A. Fireworks at Unley Oval, Mitcham R.S.l. Remembrance and Anzac Services, John Martins Pageant, Edwardstown School Concert, Mitcham Corporation in connection with the laying of the foundation stone at Westbourne Park R.S.l., Christmas Carols at Kingswood Oval, Belair Christmas Carols, Home for Incurables, Bedford Park Hospital and Mitcham Reserve 7 times. Of all these performances, the only paid ones were:- Plympton School Fireworks and C.T.A. Fireworks. The money received from John Martins Pageant was, at this stage, divided among the members taking part, and, as was the law at the time, the Band could not take up a collection at any Sunday engagement, therefore the finance at the end of the year was causing some concern.

In 1956 as in the past few years, the Band found paid engagements few and far between as the Public liked to have a Band at their function but were not prepared to pay for their services. The Band, however, did 10 performances for the year but they were not all paid ones. So to help with the finances, a fete was held in conjunction with the Institute Committee and the Youth Club in March, and the Band’s share of the profits was 87 Pound ($174-00)

Also during the year the Band started its first paper drive to help with the Band funds and this form of revenue has continued for many years.

By this time, the instrument fund which had been running for about 3 years, now stood at 499 Pound ($998-00), this however was still a long way short of their goal.

1957 was a particularly trying year owing to the fact that Brass Bands were generally experiencing difficulty in maintaining interest for their members and Mitcham was no exception, and the Bandmaster of the past 11 years was forced to resign on doctor’s orders due to illness, and Mr. Ken Horsell, the Deputy Bandmaster, took charge until another Bandmaster could be found. After some months, Mr. G. Yanderwerp was persuaded to lead the Band. At this stage the membership stood at 25 members of which there was an – average attendance of 20. The Band participated in U engagements during the year, these being:- Royal Show, Colonel Light Gardens Church Pete, Goodwood Boys Technical High School, Blackwood Fireworks, John Martins Pageant, Mitcham R.S.L. Anzac Service, Belair Community Centre, Davies Co-op Picnic, Blackwood Memorial Hall Opening Ceremony, and 4 concerts in the Memorial Gardens on Unley Road. After 55 years of active playing, Mr. A.B. Michell retired, although not now a playing member, he still maintained his interest by retaining the Position of Treasurer.

* 1958 was a very similar year to 1957 as far as the Band was concerned, with the exception that the Band was included in the Massed Band that appeared at the Royal Music Festival and River Pageant held at Elder Park in the presence of Her Majesty Queen Elizabeth The Queen Mother. This was possibly the highlight of the year. This was the second such performance, as on 24th March 1954, at Wayville Oval, in the presence of Queen Elizabeth XL and His Royal Highness The Duke of Edinburgh, Mitcham Band performed at the Royal Music Festival.** During the year the Band also competed at Tanunda and gained 2nd position.

By 1959, with the advent of Television, the Band was experiencing another phase in its existence, but, with the co-operation of its members, it was able to weather out the storm and by the end of the year had actually increased its membership to 32, but alas, the average attendance at rehearsals and engagements stood at 17. In spite of this the Band still managed to do 23 engagements such as:- Concert at Blackwood, Royal Show, Hockey Carnival, 2 Concerts at Belair Community Centre, Ashford Hospital, Mitcham Youth Fete, Brighton Carnival, Christmas Carols Concert, 4 Summer Season Concerts, Glenelg Carnival, Mitcham Red Cross Fete, Netherlands Society etc. “**This year the Band also competed at Tanunda in “C” Grade but only managed 3rd position, however, they did not disgrace themselves. During the year 2 more members were granted Life Membership after completing 21 years continuous service, they were Messrs E.C. Smith and M.H. Michell, also Mr. C.K. Horsell completed 50 years of active service. 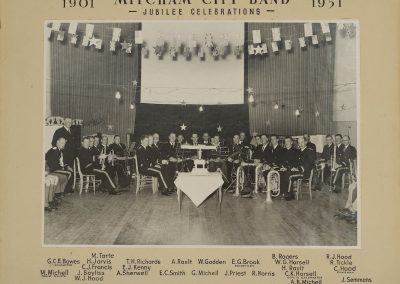 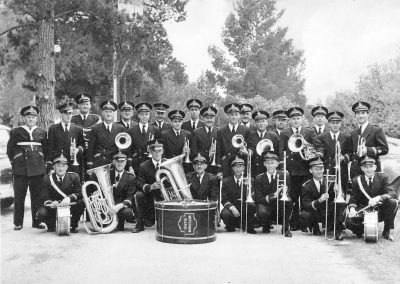 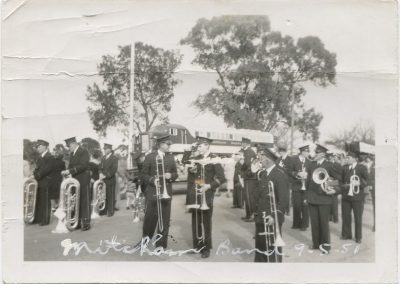 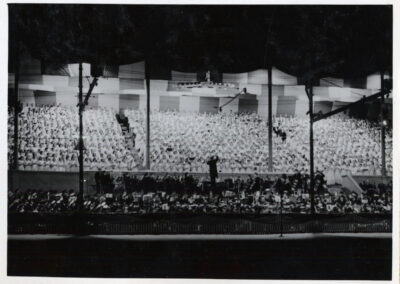 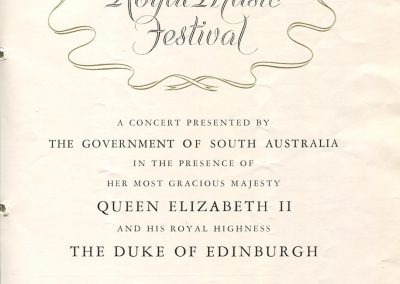