By 1960, mainly due to having contested at Tanunda the previous 2 years, the Band had reached quite a respectable standard in music playing, but unfortunately, this was not maintained.

During the year 15 engagements were undertaken to everyone’s satisfaction, and with a credit balance of 244 Pound 3/2 ($488-32), the best for many years, the Band looked forward to the 60’s with hope and interest.

By this time the instrument fund was nearing its objective and it was hoped that these instruments could be purchased in the near future. As was previously stated, the advent of Television had a great effect on Banding and engagements in general for the first few years, as people would rather stop at home than go and hear concerts, whether it was a Brass Band or otherwise.

The Band again ventured to Tanunda this year, being their third year straight, hut, as in the previous two years, were not disgraced, hut did not take away any prizes.

1961 saw the fulfilment of the years of saving money in the instrument fund as the Band acquired 4 new cornets, 1 Tenor Horn, 1 Baritone, and 1 Euphonium, and as finance permitted, were going to purchase more. Even with Television being at its height, the Band still managed to do 14 engagements. At the start of the year the Band’s membership was 32, hut unfortunately, this decreased to 26 during the year with an average attendance of 18. During the year drastic renovations were carried out on the Institute Building and thus the Band did not enjoy full use of the Band Room. This year the S.A.B.A. organised a Bandmasters training class to which three members of the Mitcham City Band attended. The Band performed at 15 engagements during the year. The learners Class, although down to 5 learners, still continued to practice on Monday Evenings prior to Senior Band Practice with Mr. R. Clark as its conductor. Also this was the year that the first female member, Miss Rosalie Smith, joined the Band.

During the year the Bandmaster, Mr. G. Vanderwerp resigned and the Band advertised for a replacement Bandmaster, and, after a series of auditions, Mr. C. Britton was selected.

In 1962 Mr. C. Britton was granted leave of absence due to business reasons for the first part of the year and so Mr. W. Hood had to take over control of the Band as well as holdong down the Treasurers job. Membership of the Bard had improved slightly during the year and ended the year with 32 members. The Band had 20 engagements during the year (5 more than the previous year), some of those engagements were:- John Martins Pageant, Mitcham Air Force Evening, Belair Hospital Fete, Simpson Picnic, R.S.L. Anzac Services, Mitcham Red Cross etc.

As in previous years the highlight of the year was the Children’s Christmas Party. During the year, upon the request of the Band members, the practice night was changed from Monday to Wednesday Evening after over 50 years. Also at this stage some more enquiries were made in reference to the Band owning its own Band Room, but as before, this came to nothing. During the second half of the year, the Band had the misfortune of losing the services of Bandmaster Mr. C. Britton, upon him being engaged as a full time member of the South Australian Orchestra, and, after some serious consideration,

Mr. Bert Harding was invited to take charge of the Band, which he did in late November of that year, As has happened on many occasions before and since then, Mr. W. Hood took control of the Band for the period of time between losing Mr. Britton and Mr. Harding taking over.

In 1963, although the Band had just acquired the services of Mr. Harding, it decided after quite a few years of non-competition to enter the Australian Brass Band Championships which were held at Norwood on 27th to 30th March. Seeing that the Band only decided to enter in November, and it was not until mid January that any serious action was taken, leaving only a few weeks to prepare, and on top of this they decided to enter “B” Grade (this alone was a big step as the Band was graded “C” Grade at the time) it performed remarkably well to obtain 2nd prize. The membership for the year fell slightly to end the year with 28 members. This year saw the Band taking part in 16 engagements, e.g. John Martins Pageant, Mercedes College, 5 Concerts at National Park Belair, Star Theatre Unley, Blackwood Hospital Garden Party, Simpson’s Picnic etc. Also one of the highlights of the year was taking part in the Royal Music Festival at Elder Park on 20th February in the presence of Her Majesty the Queen and His Royal Highness The Duke of Edinburgh.

very well. Some members entered the Solo and Party competitions during the year and won 3 cups, which were duly handed over to the Council for safe keeping. At this stage the Band property consisted of:
INSTRUMENTS 36
UNIFORMS 32
MUSIC STANDS 27
MUSIC (Marches etc.)….Over 600. But this has greatly increased since.

During the year Mr. Eric Smith resigned as Chairman after having held the position since 1962, his position was filled by Mr. R.E. Brook. The finances at the end of 1964 were in a very healthy state. (Although no actual figure can be found) Also Mr. W. Godden resigned as a player, having joined the Band on May 17th 1904, and, with the exception of a few years away in the country, had given the Band 60 years service.

The early part of 1965 caused the Band some anxious moments when they started the year with only 26 players, and, after looking around the Band Room, realised that several of their members were nearing the end of their active career, but a sudden change in the second half brightened their outlook when, after losing 2 players, 10 new members joined the ranks, thus finishing the year with 34 members.

During the year the Band Association saw fit to promote Mitcham to “B” Grade, largely due to the untiring effort of the Bandmaster, Mr. Bert Harding in trying to raise the standard of playing and being successful. Unfortunately, through lack of interest, the learners Class ceased to exist, and some serious thought was given to what could be done to encourage young people to learn Brass Band Music. The Band performed with great distinction at the following engagements:- Remembrance Service at Mitcham, 5 concerts at National Park Belair, Immanuel College, a series of 4 concerts in the Remembrance Gardens, Norwood Oval Marching Girls, Blackwood Hospital, Simpson Picnic, John Martins Pageant, Unley Chamber of Commerce, Mitcham Shopping Centre, Anzac Services at Mitcham And Blackwood, Mitcham Red Cross, Society of Sponsors, making a total of 22 engagements. During the year the Band purchased 2 Side Drums, 1 Bass Drum, 1 Tenor Trombone and had 2 Double B flat Bass’s reconditioned. The Band again decided to contest at Tanunda in November but alas, again did not take away any prizes, much to the disappointment of the Bandmaster, but this was somewhat expected, as Mr. W. Hood was unavailable, and because of the Band having to include several non-regular members and two permit players, and, added to this, the very unfortunate illness of a gallant old member Mr. K. Horsell, and further hindered by the irregular attendances at rehearsals which was a constant problem.

1966 saw the end of an era as far as the Band was concerned, for this was the year that Mr. Ern Brook retired as Secretary after having held this position for 33 years. His place was then filled by Mr. H.C. Rault and the date for the Annual General Meeting was changed from August to March after 65 years as this was thought to be a more convenient time to hold these meetings because if the Band was going to contest at the State Band Championships at the end of the year and was to change the Bandmaster, it would give the incoming Bandmaster more time to practice with the Band.

After the failure at Tanunda the previous year, the enthusiasm of the Band seemed to wane and they were struggling to keep alive. Perhaps it could be put down to set-backs they received when they lest 6 of their regular members, thus having a roll call of 27, but, unfortunately, not very regular attenders. Nevertheless, the Band still took part in 13 engagements such as:- John Martins Pageant, Mitcham Shopping Centre, Glenelg Carnival, Unley Chamber of Commerce, R.S.L. Remembrance Service, Myrtle Bank Soldiers Home, Carols by Candlelight on the Garden of Remembrance¬, and a series of 5 concerts at National Park Belair. At this time another learners Class was started, attended by 8 hoys and under the direction of Mr. R. Clark. It was hoped that this would produce some promising players.

Although the Band did not compete at Tanunda in 1967, it was a year of quite satisfactory achievements and fulfilments. It was with a feeling of regret that the Band received Mr. Bert Harding* s resignation as Bandmaster, this position was filled by Mr. W.J. Hood who had been assistant Bandmaster for several years and as such had taken control on a number of occasions over this period of time. The learners Class grew steadily during the year and although meeting under great difficulties, some of the boys had progressed quite well and were gaining further experience by performing with the Senior Band at engagements. At this stage the learners Class were meeting in the building alongside the Band Hall (later taken over by the Civil Defence Organisation) thus making the learners Class completely separate from the Senior Band.

As for engagements, this year saw a change in policy whereby the Band decided to visit a number of Homes and Institutions instead of playing at the Mitcham Memorial Gardens. (Which they had been doing for several years.) This venture proved a great success and was continued for a number of years. During the year the Band took part in 18 engagements.

By this time the Band*s financial position had become quite sound being boosted by two quite large donations during the year, thus enabling the Band to purchase instruments to the value of $1630, and thereby allowing more instruments to be made available to the learners Class. Also $1200 was transferred from the General Fund to a Uniform Fund with which it was intended to equip the Band with a much needed set of new uniforms as soon as ample funds became available. Also the members worked enthusiastically to raise funds through the salvage account, which will go towards the Band’s Building Fund. (This fund was transferred to the General Account in 1982 as it was decided that the cost of land and buildings was way beyond the means of the Band.)

1968 was very similar to the previous year both musically and socially. However, during the year, the Mitcham Council made a generous offer of land and finance so that the Band could build its own hall. This offer was that the Council would give the Band some land and one third of the cost of the hall, loan the Band another third, leaving the Band to find the final third, but alas this was beyond the capabilities at the time so the offer lapsed.

Although there was a great deal of concern as to the decreasing membership of the Senior Band, the Learners Class, however, under the instruction of Mr. V. Carpenter, was progressing very well.

The Band continued to work in raising money towards the building fund although they realised that progress in this field was going to be slow, but they did not realise how slow. 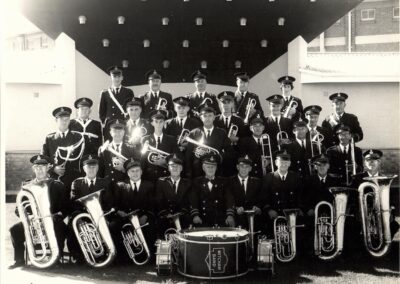 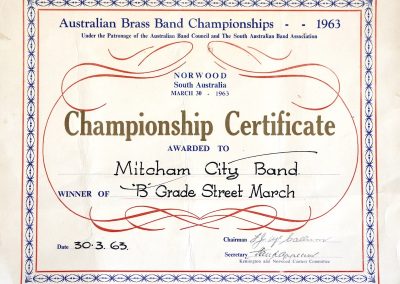